I didn’t want to spend more than a day in Chiang Rai and that’s why I chose the all-inclusive package from a tour operator. So: here’s all you need to see around Chiang Rai.
1. Wat Rong Khun – White Temple 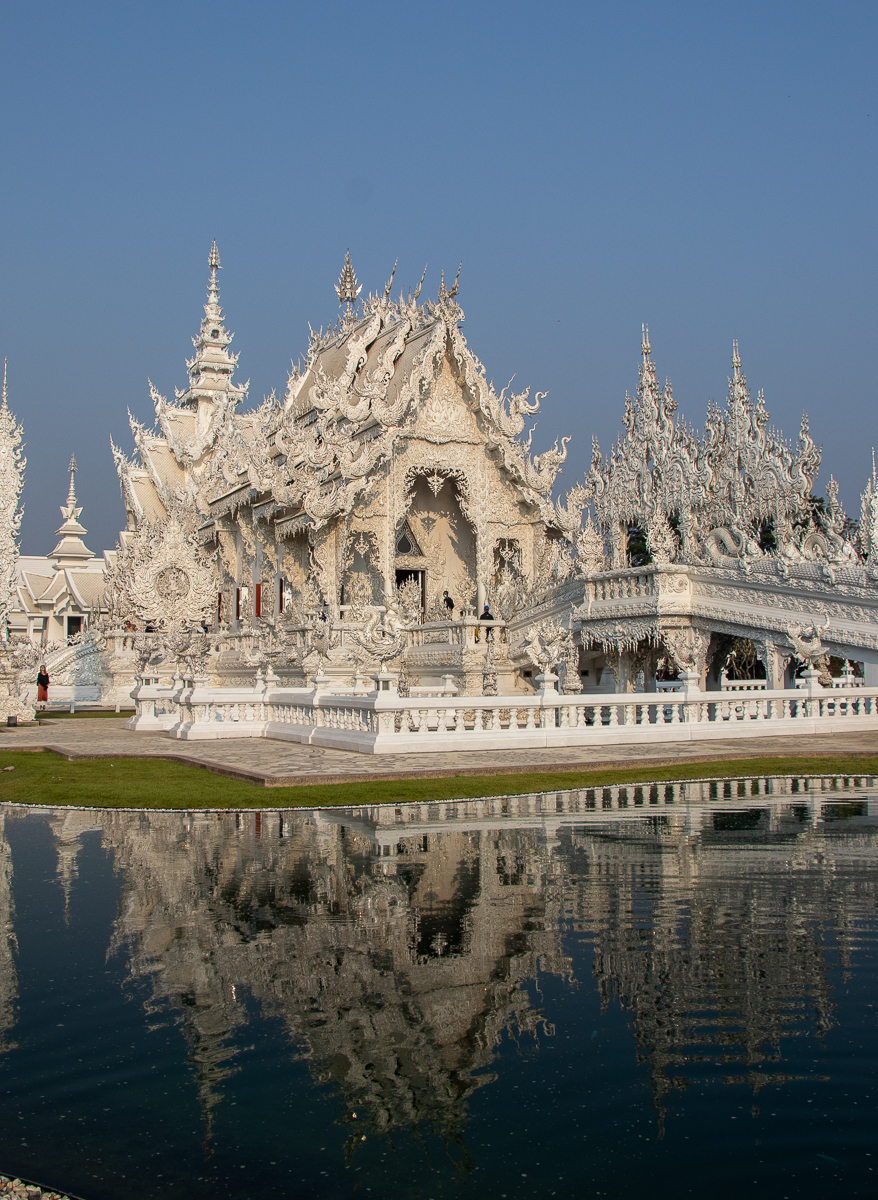 The White Temple reminds a little – let’s say a lot – of an ice princess’ castle. Brief history: At the end of the 20th century, the original temple was in pretty bad shape. A local artist, Chalermchai Kositpipat, decided to completely rebuild the temple and finance it with his own funds. He sees the temple as a gift to Buddha and believes that the project makes him immortal. Incidentally, the temple is not yet fully built. According to Wikipedia, the building won‘t be completed before 2070. Visitors can‘t take photos inside. However, the motifs on the walls are quite contemporary: the Minions, Michael Jackson, Spider Man and the events of September 11th are shown here, among other things.
2. Wat Rong Suea Ten – Blue Temple 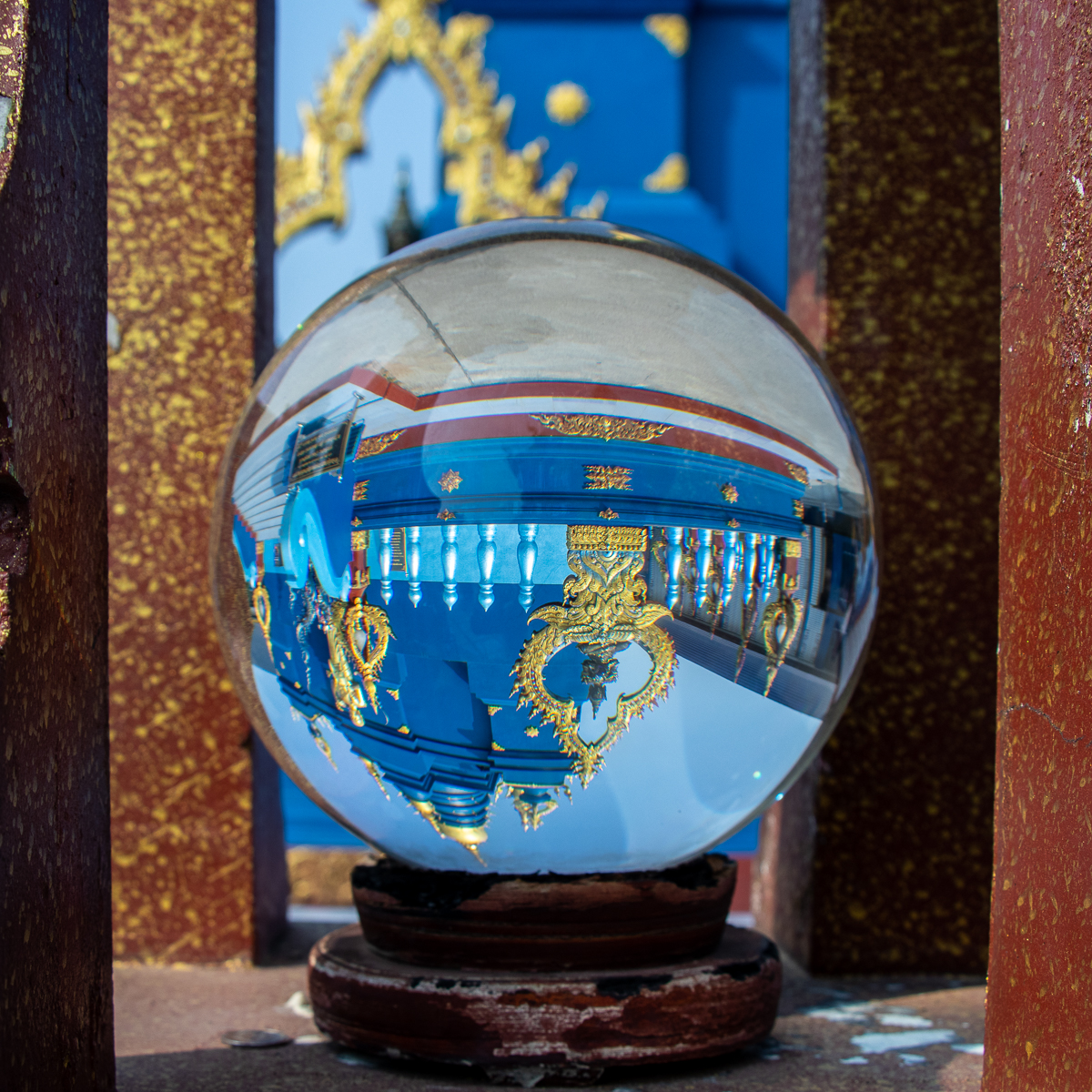 A temple all in blue. While the White Temple isn’t consecrated, Buddhist ceremonies can take place in the Blue Temple. The new building / reconstruction was completed in 2016.
3. Black House
Was on the list, but I took a break at this point and therefore can’t say much about it.
4. Karen tribe – the long-neck women 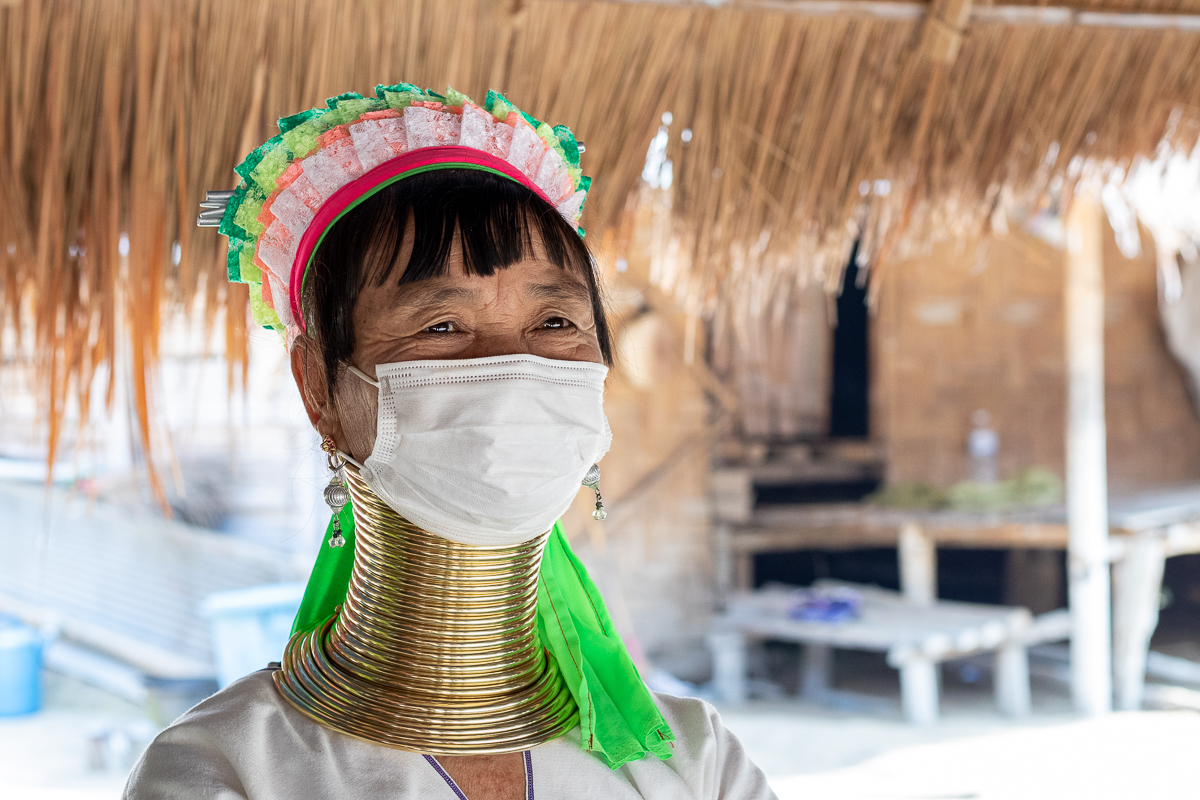 The fear of the Corona virus has also reached the Karen tribe. The women with long necks try to protect themselves from the virus with masks. Regardless of this, my visit there is divided. Only a few people of my group took a look at the “village”. I put that in quotes because the village is not original. Rather, it was built to show tourists the women with the golden rings around their neck and legs. And to be honest, it’s like a human zoo. The village is more a market where tourists can buy souvenirs, clothes and scarves. And the women? The hill tribe originally came from the southeast of Myanmar and Vietnam. Wikipedia says that many women who have fled from Myanmar to Thailand since the late 1980s are “marketed” here. So, women are dependent on tourists somehow. Bur anyone expecting a little authenticity will be disappointed. 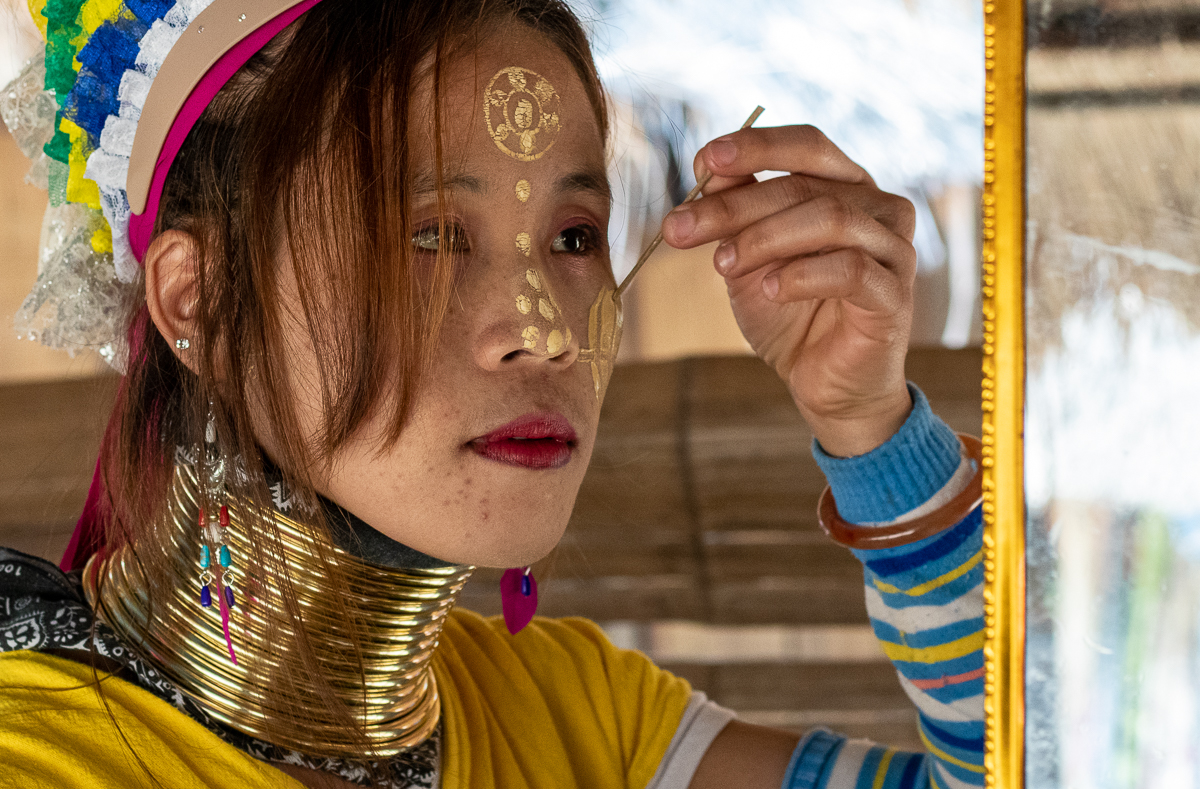 Why do women wear rings? Our guide explains that this tradition was supposed to protect women from being raped by men from other tribes. The rings on the neck and legs should deform them extremely, making them unattractive. By the way, the neck isn‘t longer, but the heavy rings press the shoulders down, which makes the neck appear longer. Even little girls wear the rings so that the body adapts accordingly.
5. Tea plantation 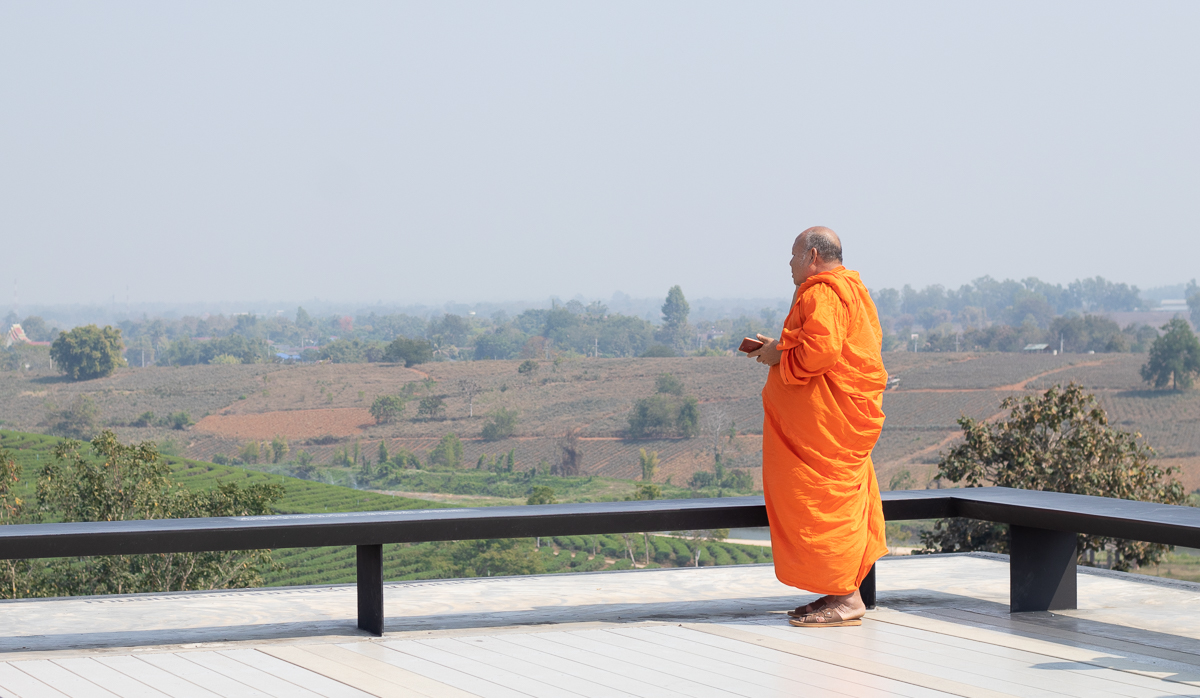 Green tea grows in many fields in northern Thailand. Many plantations offer samples. I don’t know if this monk tried tea as well, but he certainly enjoyed the view.
7. Monkey visit 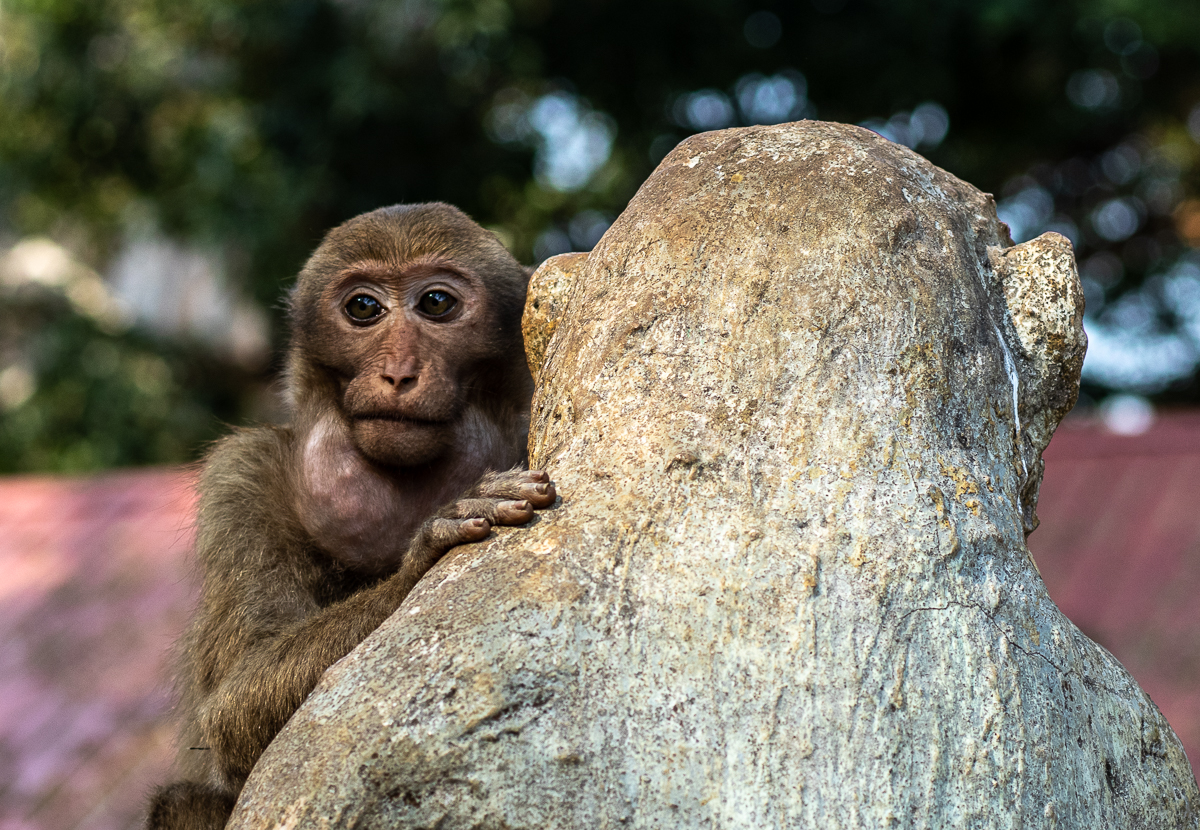 The Monkey Cave was the next stop on our tour. I haven’t discovered a cave. But lots of monkeys, who were after the treats of tourists, which you could buy at the entrance. Definitely not my favorite stop. The monkeys were aggressive, each tourist was given a stick to help defend themselves against the animals in an emergency, and the monkeys are likely to get far too much food, because tourists can buy this locally and feed it to the monkeys. I‘m therefore not sure whether the large bulge on this monkey‘s neck is normal.
8. Chiang Saen – the Golden Triangle 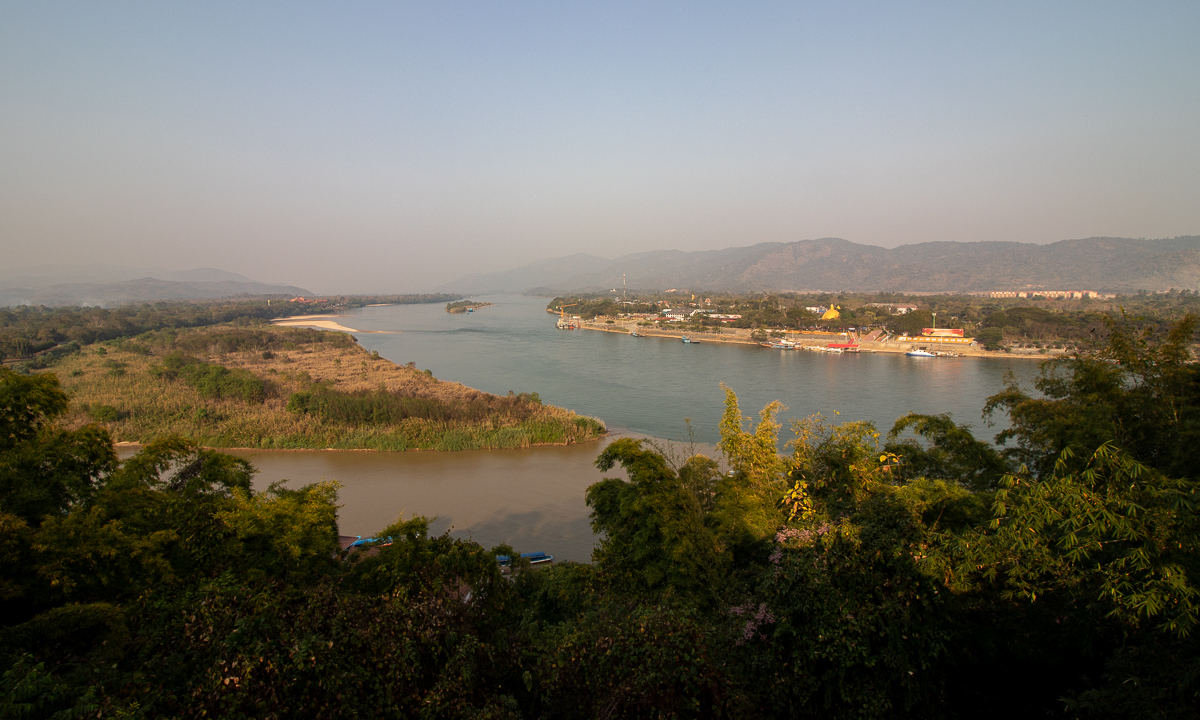 Thailand, Myanmar and Laos meet here. The landscape is simply beautiful. There is also an opium museum, which explains how the intoxicant is manufactured, how it was used and smuggled.
Conclusion:
At the end of the day, I was just exhausted – and I decided that I would no longer book such all-round carefree packages. Not just because I felt like arriving with 200 other tourists in 20 vans at the same time. Also because I didn’t have time to take a breath, to take the place in. Also, if I had traveled there myself, I would have done better research and deliberately decided against program points that I find unworthy for people and animals.