My ride on the VIA train was supposed to fulfill only one purpose: to take me from Toronto to Saskatoon. The journey took two and a half days. I spent both days looking out of the window to not miss a thing of Canada‘s beautiful scenery. A different type of fear of missing out. And in my fellow travelers, I have found friends for life.

“I want to see all of Canada, not just half.” A short break. The look of the mid-sixties towards me wandered from the outer wall of the showers on one side to the window on the other. “This doesn’t work out for me at all. I’m complaining. Where is the lady? “Annoying slipping on the seat.” And these are loud children. How am I supposed to sleep? “She grimaced. “Oh, haha, you must think that I’m a grumpy bitch.” A tired smile on my part. I didn’t answer this question, but thought a loud yes and answered with an eye-roll after the lady then actually evaporated to get rid of her frustration. Nikki, that’s the name of the foaming woman, was supposed to be my bed neighbor on the train from Toronto to Saskatoon. What a disaster, I thought, if I had to spend a good two days with this lamenting battle-axe. I did not have to because Nikki got a new sleeping place with a view on both sides of her seat. But I did it anyway. Because she turned out tob e one of many wonderful people that I got to know while driving through half of Canada.

There are several ways to travel through this big country. I decided on the by far slowest option. But probably the most beautiful. The VIA train on the Toronto-Vancouver line is called “The Canadian”, has been running since 1955 and takes four days and four nights for the 4,466-kilometer route through the beautiful Canadian countryside. What was the means to an end, coming from Toronto to Saskatoon near my next stop as WWOOFer, became one of the best things I’ve ever done.

Landscape As In A Storybook

Right on time at 9:45 on this Sunday morning at the end of June, the shiny silver train in Toronto’s Union Station set in motion. Rocking and squeaking it made its way out of the Canadian metropolis in a north-west direction. Finally I’d have time to write, read, edit photos I thought, because the trip to my destination took a good two days. Well, not a bit of it – or puff pie, as we’d say in German. I didn‘t write a line, that eReader didn’t even leave my bag. Right at the beginning of the journey I made the last row of seats in the dome car with its glass roof my favorite place. The view from here: breathtaking. For hours we jogged past green birch forests, rivers and crystal-clear lakes, where trees and cotton-wool clouds were reflected. A landscape like in a storybook. Doing something different than to look out of the window was hardly possible. Like a fear of missing out.

There was so much else to discover on board the Canadian. Musicians provided entertainment, there were short lectures on the vegetation or wildlife of the region, wine and beer tasting and movies. And last but not least, there were the many fellow travelers – each single one an interesting personality. Nikki, for example, the grumpy bed neighbor, has traveled across the country on the Canadian several times – this time on the way to Seattle to visit with her son her son. Or Ben, in his mid-20s and aspiring actor, singer and dancer. And Derik, whose parents are of German origin and who has worked in marketing for a long time. I put out these three because we found each other on the way. From the beginning we had a very special connection. So special that fellow travelers thought we had known each other for years and were traveling together on the train.

When Showering, Balance Is Needed

The first evening I was glad that I had decided to spend a little more on the train ticket. While we sat at dinner, the train staff converted our benches into beds. Really cozy. SeriouslyBeing rocked to sleep gently is a special experience. Not so gentle was the rocking the next morning. Ever tried to shower accident-free in a shaking shower? Or filling tea from the pot into a cup while rattling? 😉

During the breakfast the landscape changed outside. There was less green, the area became rockier, and the train often passed by very close to the rocks – or not. Again and again we stood on one spot, had to let pass one of the many freight trains that seemed endlessly long. The route is predominantly single track passable, VIA is a guest on the tracks, freight trains bring more money and therefore have priority. We travelers didn’t really care. This way we had more time to spend on the train.

Canada Day On The Canadian Train

This second day of traveling was a special one in Canada. The country celebrated its birthday. That’s why there was cake and sparkling wine for everyone on the train. And when we arrived in Winnipeg in the evening we celebrated there, too. We had a good hour’s stay, could walk a little along the river and mix with the crowds of people dressed in Canadian red and white in front of a big stage and listening to bands. However, some fellow travelers rather spent the waiting time in the arrivals hall. This was the first chance to use a WiFi since we had left Toronto. And there is hardly any vell service along the track. (I admit: I too at least briefly used it to send a sign of life to my friends at home.)

After the train set off again after sunset, we were able to see the many fireworks on the occasion of the national holiday across the vast expanse of the Canadian prairie. The highlight, however, came after midnight. Through the glass windows of the dome car we watched an thunderstorm, the lightning flashed all over the sky. An amazing spectacle.

But even the most beautiful journey has an end. It was a bit of a sad last morning in the train. While Nikki, Derik and Ben took the train to Vancouver, I got off in Saskatoon. A sad farewell – also from the train. The ride on the Canadian was a unique experience and so special that when I got off I decided to travel the rest of the way west by train – contrary to the original plans. To put it in Nikki’s words: “I want to see all of Canada, not just half.”

Tip
If you book about four weeks before departure, you can benefit from so-called Sleeper Plus Class Deals. The regular conditions apply (food and luggage according to the guidelines included), but at significantly reduced prices. www.viarail.ca 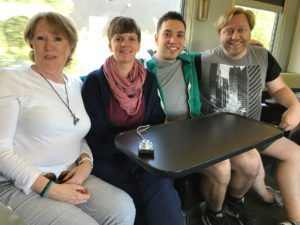 Thank you
Nikki, Derik and Ben for the wonderful time, open conversations, bellyaches from laughing and your friendship.
Susan, who financed the shared taxi ride from the Station in the middle of nowhere to town.