Today, India celebrates its Holi festival and with it the arrival of spring, love, colors and the victory of evil over good. A year ago, I was right in the middle of the colorful hustle and bustle. A flashback.

In the evening, Rishikesh looked as if someone had dumped a giant paintbox over the city. Bright pinks, greens, yellows and purples covered the streets and pathways. People were so covered in colored powder that it was hard to tell where clothes began and skin ended. Even cows and dogs were colorful. And after people returned home and scrubbed the color off their skin, the gutters in the outlying districts also filled with pink sewage.

Holi, the festival of love and color; the festival that celebrates the end of winter and the arrival of spring. Our yoga teachers had given us an extra day off. To be able to celebrate Holi in its motherland, India…. What a gift. The smell of bonfires had already permeated the city the night before, a clear spring full moon night. Us aspiring yoga teachers spent it on the rooftop terrace, listening to the sounds of music and people celebrating, and admiring the moon, which was so big and close that evening that we felt like we could screw it out of the sky like a light bulb. 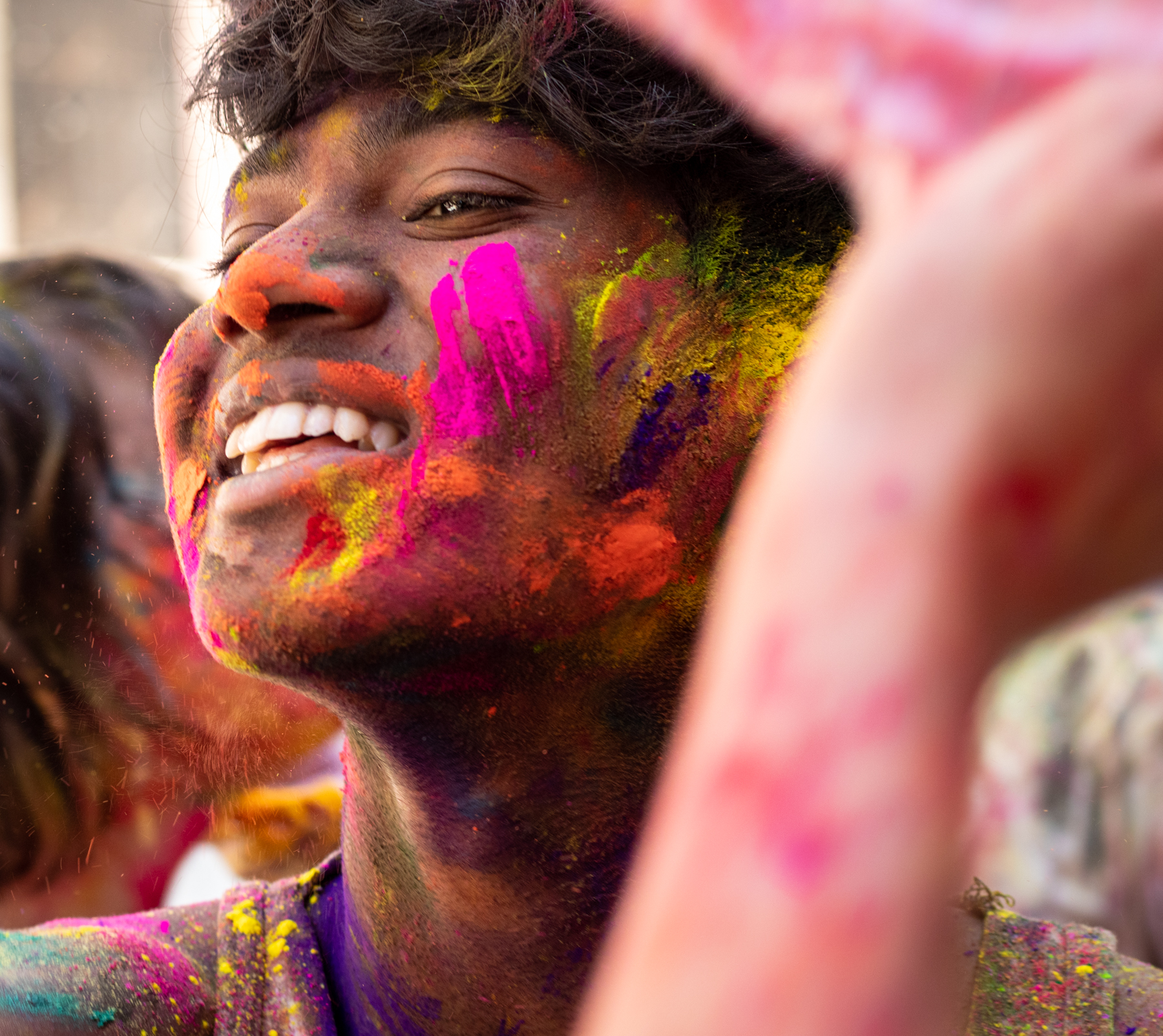 Our usually quiet yoga shala felt a bit like a beehive on Holi morning. There was joyful excitement in the air and exclamations of delight when our yoga teacher Surinder handed us silver trays of colored powder carefully shaped into little hills. Carefully, we reached into the colored powder, amazed at how soft it felt on our skin. That was the end of our white shirts. 😅

So, we set off in small groups towards the city center – past colorfully powdered sadhus, street vendors who today had piled color powder filled in small plastic bags on their carts instead of malas, past laughing women and children. We posed for countless photos with people we had never seen before, as if they were good friends. All along the way, we engaged in color battles, smearing and throwing paint on arms, faces and in the air – and getting more and more colorful ourselves. We made it dry through the small shopping street, where people had positioned themselves on balconies and roofs with water balloons and buckets. A huge beautiful mess of color. Women in traditional saris, tourists, men in turbans, animals – all boundaries and differences seemed to blur into a wave of joy, bliss and faces beaming with delight that spread across the city. 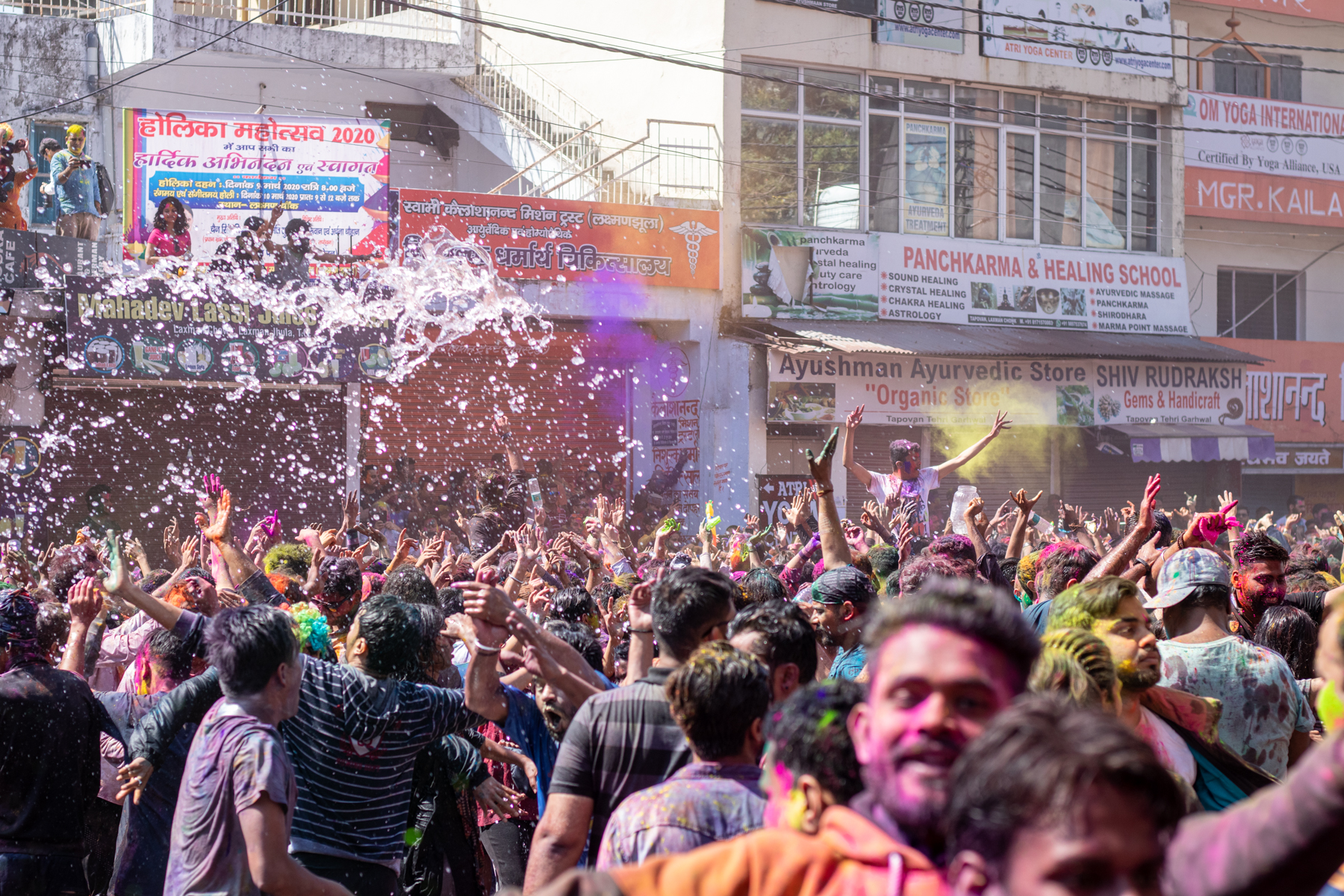 While Germany was in the first days of physical distancing, we pushed our way through densely packed crowds on the Laxman Jhula, the imposing suspension bridge that crosses the Ganges in Rishikesh. We constantly had foreign hands with color in our faces, on our arms, on our heads – people, colors and animals virtually merged into one giant bubble of happiness.

Arriving north of the Ganges, thousands of mostly young men danced exuberantly to loud music, powder formed colorful clouds in the air, water to cool down splashed from hoses and reflected glittering in the sun. A gigantic picture, hardly describable – which was overwhelming visually and emotionally in equal measure, bringing so many impressions with it that we needed a rest at the Ganges after only a short time. 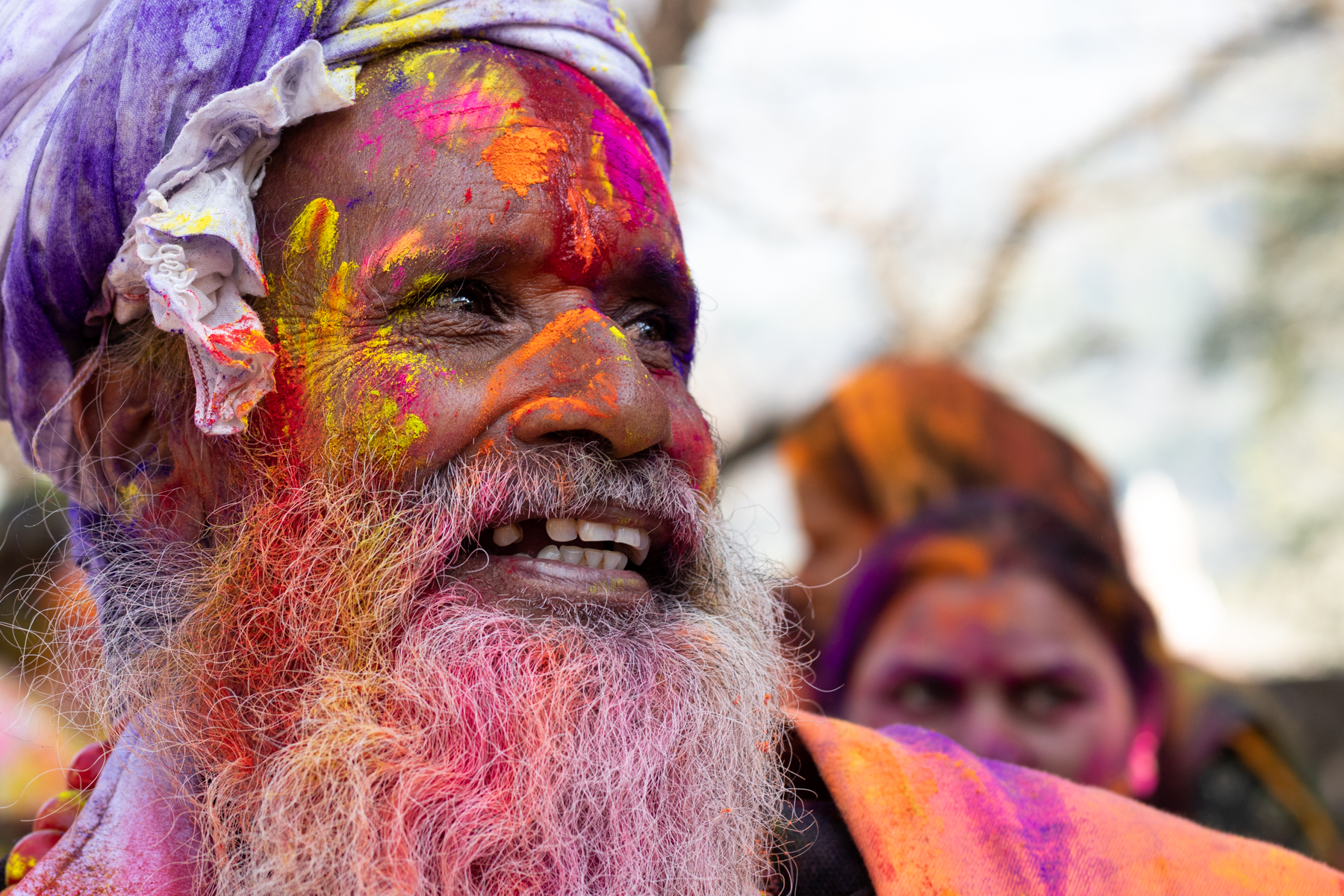 Colorful and tired, we returned to the Yoga Shala in the afternoon, carefully going to our rooms so as not to spread color powder everywhere. For minutes, pink water ran down the sink while we showered. Holi powder color is so fine, it truly finds its way everywhere 😉 And it is so stubborn that one or the other still had to scrub pink residues from their skin days later.

Goosebumps crawl up my spine when I think of this experience a year ago. Thinking of that mass of happy people and all the colors, looking at photos and thinking of the people I was able to share that day with fills me with joy every time. India celebrates Holi this year as well – despite many restrictions there was a great celebration, as my yoga teacher Surinder reports. In this spirit: Happy Holi! 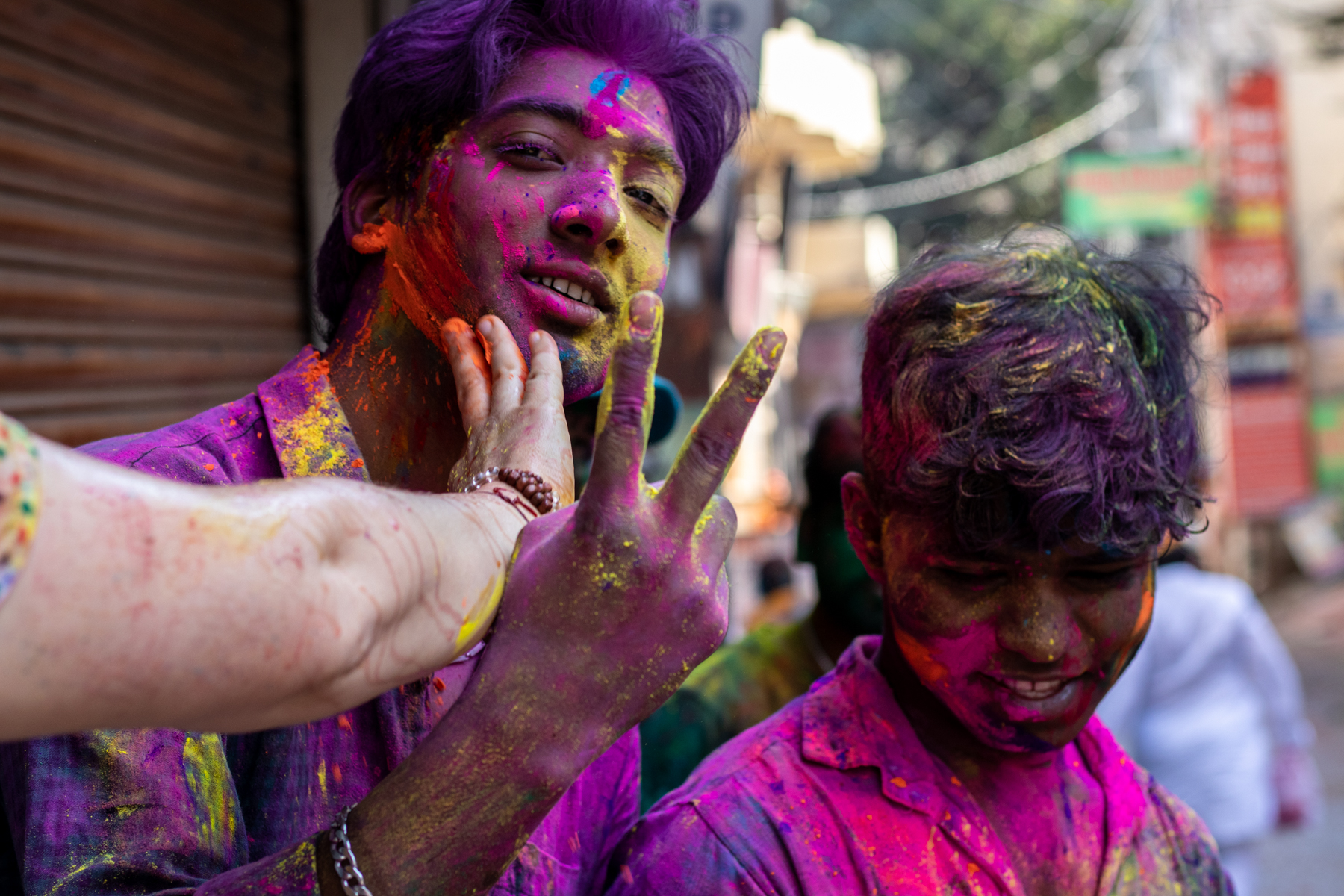 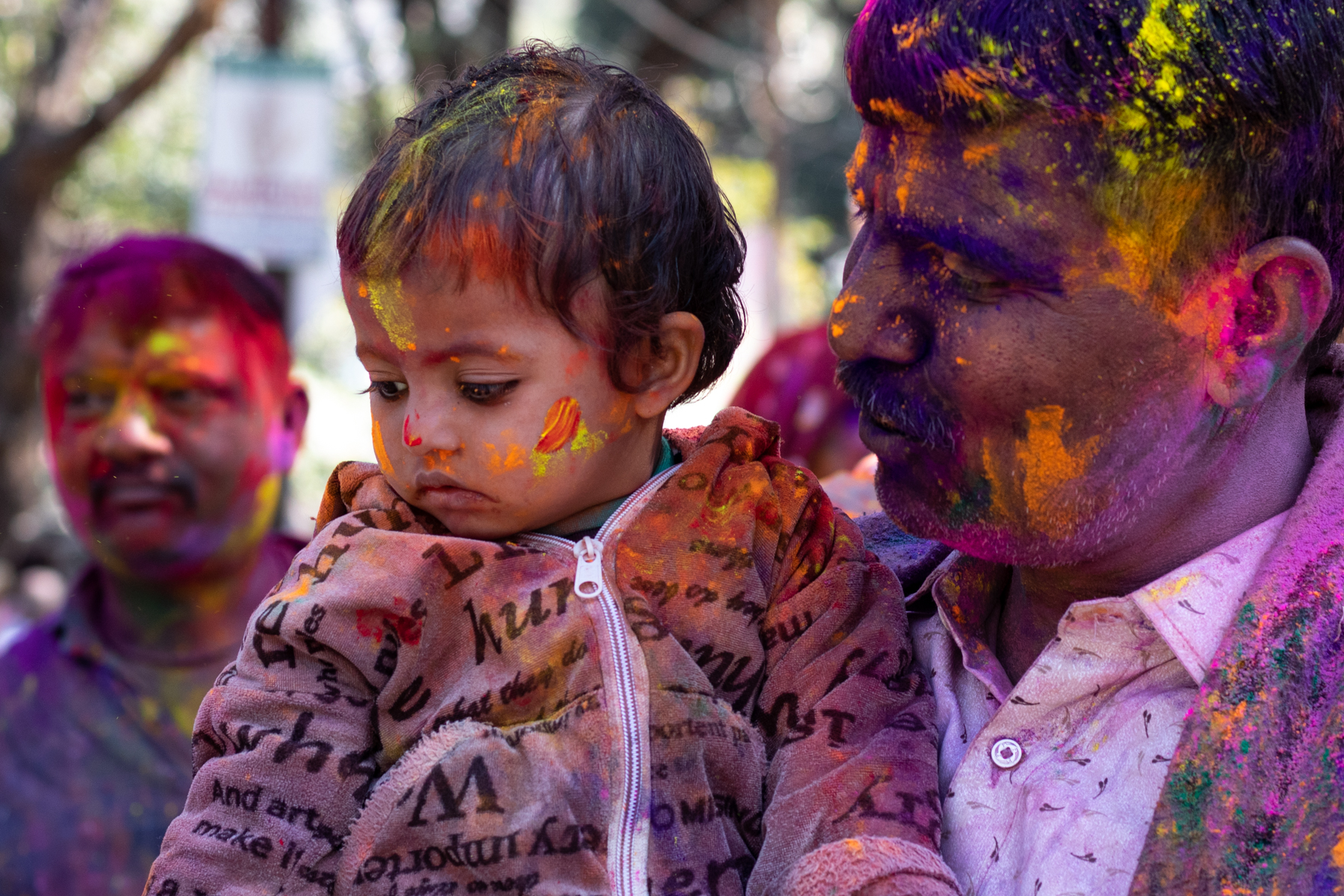 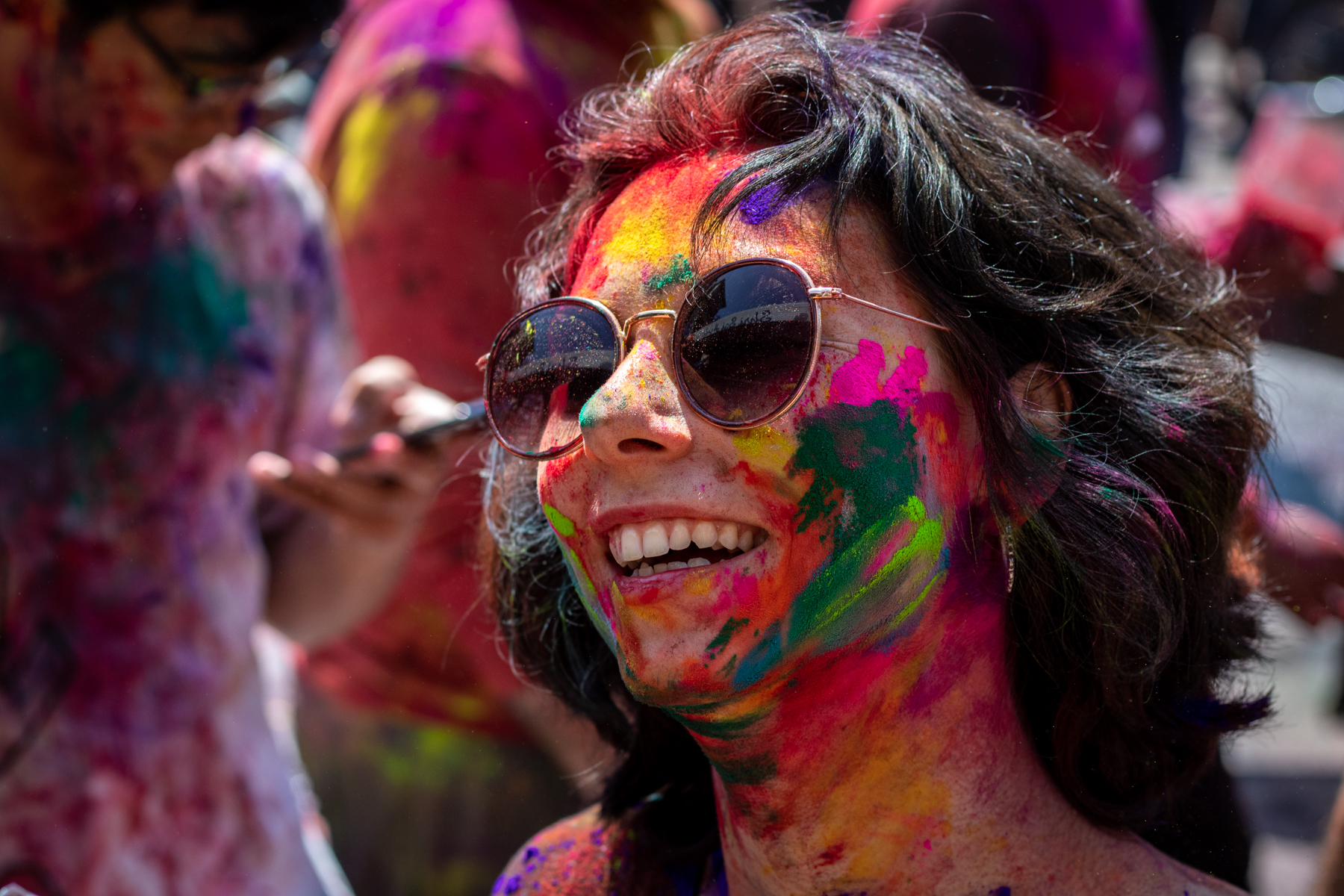 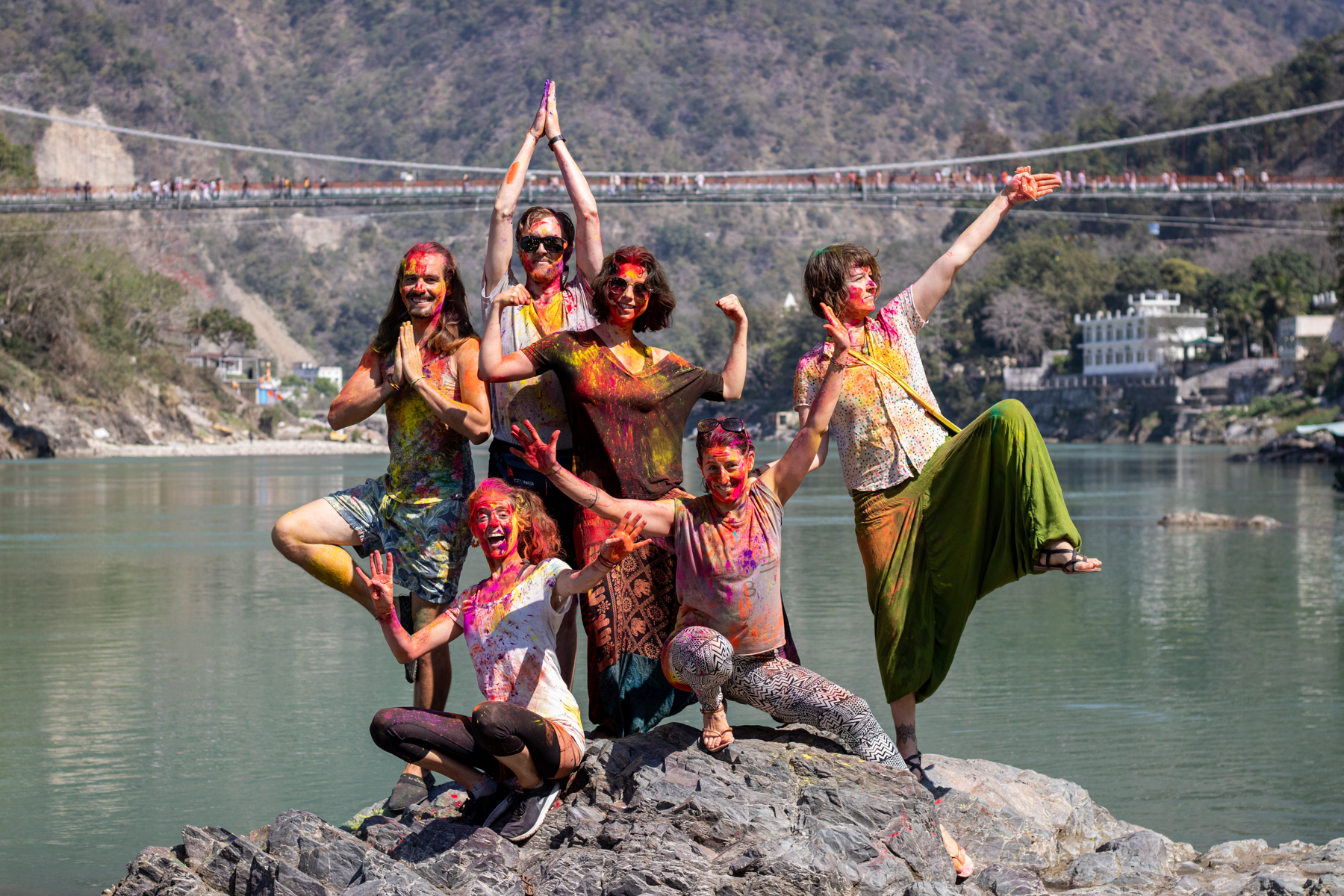 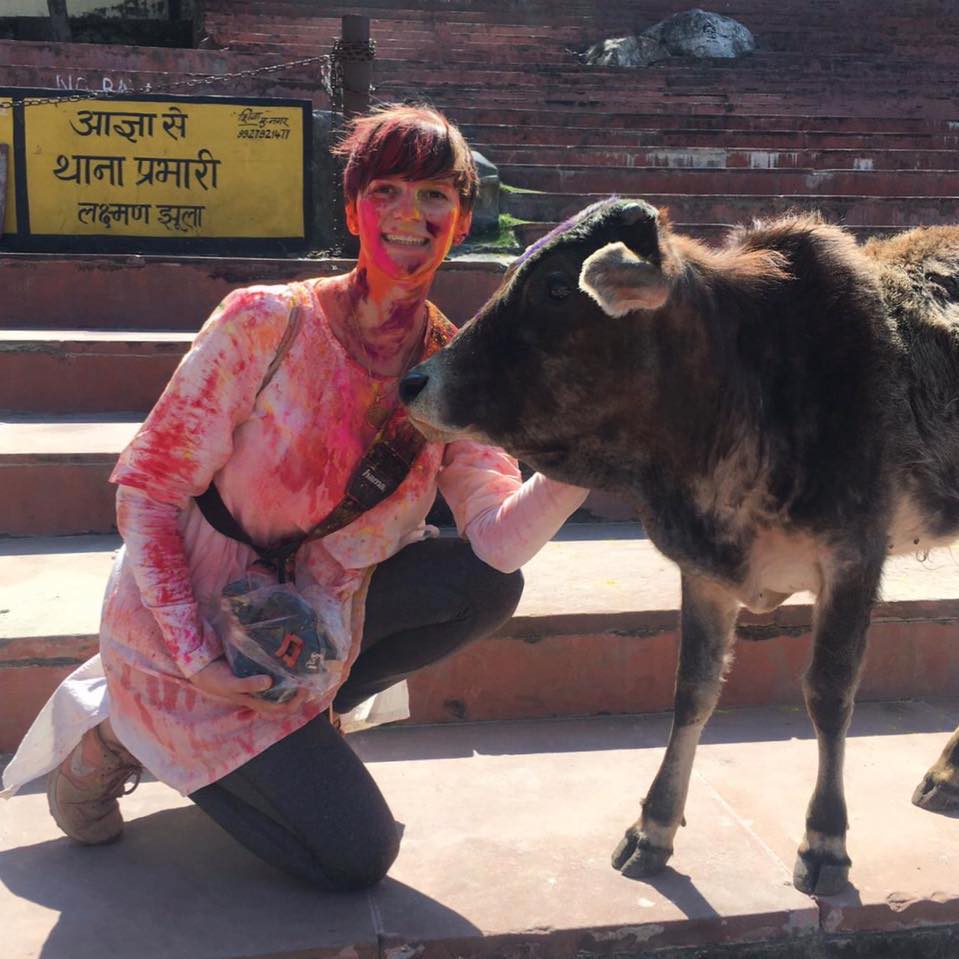